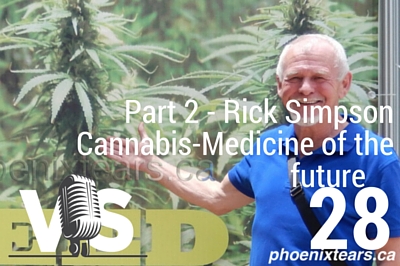 Rick Simpson is a retired power engineer who worked for 25 years in the medical system in Canada.  After suffering a severe head injury in 1997 he took all the medications that the doctors prescribed, but their side effects did nothing but harm.  So in desperation he turned to the use of cannabis extracts, which he produced himself and quickly found that he had discovered the greatest natural medicine on earth.  After learning the truth about the amazing healing abilities of these extracts, he then went to everyone in authority to have its use recognized once more,  but found that in reality those who control our lives, wanted to keep the truth hidden from public view.  Having nowhere else to turn, he then made this knowledge public and since that time countless individuals worldwide have used his information to cure or control illnesses for which our current medical systems have no solution.

Rick Simpson was giving the oil away for free, since he was growing plants in his own backyard, while he was still in Canada, until 2009, when the Royal Canadian Mounted Police did the final raid at his home. Rick was always talking about THC oil, and not CBD oil. The oil that he was giving away for free had a very high percentage of THC and it also contained low levels of CBD and other cannabinoids.  Today these extracts are usually called RSO or Rick Simpson Oil and it was the previous leader of the hemp movement Jack Herer himself who coined this phrase. Since 2013 Rick no longer lives in Canada.

“I want people to know how to heal themselves.”  –  Rick Simpson

NOTE: Rick Simpson does not want to be connected with any company that is producing hemp oil. We need to get your confirmation that you are not going to use the interview with Rick, to promote such organisations.

My conversation with Rick Simpson continues on this episode of Vidal Speaks. He’s a fount of knowledge when it comes to the growing of cannabis for medicinal purposes and gives some detailed information on this episode about the species he grows, how he creates the extracts and oils from the plant, and even gives some non-solvent based solutions to extracting the medicinal properties of the cannabis. That makes me feel a lot safer doing this myself and I think it will for my of you.

Rick Simpson’s feeling about traditional medicine is not good. With the experiences he’s had with the wonders of medicinal cannabis I can see why. If you want to know the wide variety of treatments that can be addressed and even totally healed by using cannabis extracts, Rick shares a handful of stories of the things he’s seen on this episode. I hope you’ll listen with an open mind.

Medicinal cannabis has been applied to a variety of ailments thousands of years and today’s guest, Rick Simpson, believes that there has been clear proof that it can be used to cure cancer for at least 150 years. Why haven’t we heard about it sooner? Rick believes that both the medical establishment and the pharmaceutical companies have far too much to lose in terms of profit to allow the medicinal use of cannabis to be clearly revealed. That’s why he’s been so outspoken about this wonderful healing plant over the years.

What kind of ailments do you suffer from? Would you do anything to experience true healing? If that’s the case you’ll want to hear what my guest, Rick Simpson has to say – but you’ll need to come with an open mind. He’s a proponent of the medicinal uses of the cannabis plant, which has been demonized under the term “marijuana.” On this episode Rick gives clear data that shows how cannabis has been used to treat and cure many diseases that the medical establishment continues to throw addictive drugs at. I bring this conversation to you in hopes that you can find the healing you truly need.

If you know someone who is suffering from cancer of any kind, skin ailments, breathing issues, or some unknown condition, please allow your care for them to motivate you to action. Rick Simpson’s generous sharing in this conversation could be the answer they’ve been looking for. Medicinal cannabis is not an addictive drug or a terrible thing only “potheads” use. When made and used responsibly, like any medicine cannabis can have tremendous benefits that defy explanation. Please, take the time to listen and share this episode with those you love who need this information.