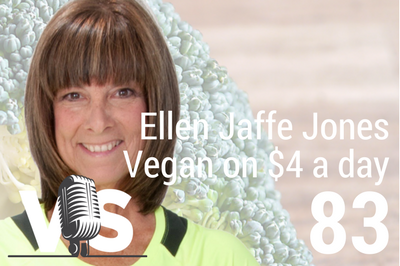 As a former investigative reporter and anchor for 18 years in major market TV news, Ellen won two Emmys and the National Press Club award. She became known as the “Earth Mother in a Suit” when she left TV and became a successful Wall Street financial consultant for five years. She wrote her first book, Eat Vegan on $4 a Day, after seeing too many news stories saying eating healthfully was impossible on a budget.

She combined all of her skill sets with her latest release, Vegan Fitness for Mortals. Recognizing that fitness and diet are two sides of the same coin, Ellen developed routines for a variety of activities along with dietary recommendations that augment fitness — a winning combination designed to help anyone achieve a healthier lifestyle.
Her other titles include Kitchen Divided, which was written for vegans who are sharing a kitchen with an omnivore, and Paleo Vegan (co-authored with Alan Roettinger). Ellen researched different versions of paleo diets on the market and was able to combine the essence of paleo diets with vegan principles in a 100% vegan cookbook. Ellen’s books to be released in the next year include Vegan Sex and Vegan for One.

Ellen is a Certified Personal Trainer by the nationally recognized Aerobics & Fitness Association of America and a Certified Coach with the Road Runners Club of America. She speaks at numerous VegFests across the country.

Outline of This Great Episode
[2:19] People come up with many reasons not to change their diet, but they’re just excuses.
[7:33] Deborah introduces Ellen.
[9:48] Ellen’s health journey began when her aunt died of breast cancer.
[13:56] We need to start living a healthy lifestyle now, instead of waiting to get a terrible disease.
[17:28] Ellen took a job on Wall Street because she wasn’t interested in undergoing plastic surgery to stay in a television career.
[19:53] Ellen accidentally became passionate about running.
[23:25] Ellen spent months crunching numbers to confirm how inexpensive it can be to eat a vegan diet.
[30:07] Why do so many people believe that eating a vegan diet is expensive?
[31:00] Can you eat organically for $4 per day?
[32:35] Buy the least-processed foods available and cook from scratch.
[34:44] It’s very hard to see loved ones refuse to adopt a healthy lifestyle.
[38:41] What about nuts, seeds and berries?
[41:10] Thank you to everyone who left us a review last week! Be sure to check out VidalSpeaks.com, where you can find my story, my favorite products, and much more! Please support this show by using the Amazon Banner on my site for all your Amazon purchases, which will pay a small commission to me with no extra cost to you. It really helps. Please also consider donating directly to keep our show going, leaving us a review, or sharing our show with a friend. All of this supports our mission. Thank you!
[42:48] Ellen shares some practical tips about making your favorite vegan foods more affordable.
[46:37] Cooking from scratch has gotten so much easier in recent years.
[50:12] Is soy bad for you?
[54:10] Vegan is the true paleo diet.
[58:45] What are some vegan pantry must haves?
[1:00:04] We’re the only species that drinks the milk of another species.
[1:01:40] How can you cope with a partner who has no interest in being vegan?
[1:04:03] Ellen’s new book, Vegan Sex, assert that erectile dysfunction is much less common in vegans.
[1:08:33] Erectile dysfunction is an indicator of heart disease.
[1:10:06] Ellen sums up her three tips to start an affordable vegan diet.

Mentioned In This Episode
Local Harvest