Unconditional love: From A Cattle Ranch To Veganism With Renee King-Sonnen – Episode 97 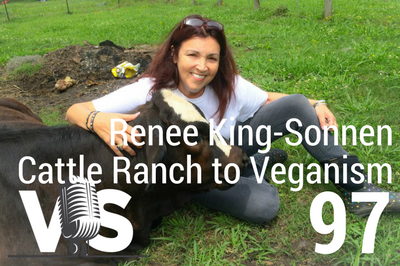 Unconditional Love: From a Cattle Ranch to Veganism with Renee King-Sonnen – Episode 97

Today Vidal receives Renee King-Sonnen, today’s episode is about a love story and how love can transform us in amazing ways.

This is Renee’s personal journey before and after opening an animal sanctuary.

Renee was born and raised in Houston, Texas and is the founder of Rowdy Girl Sanctuary. Renee was a dyed-in-the-wool city girl before moving with her husband, Tommy, to their Angleton, TX Ranch in 2009. She fell in love with all the farm animals on the ranch. She had no idea that her life was about to be forever changed as a result of her husband’s ranching business.

After witnessing time and time again the ranch’s baby calves going to the sale barn, she became more and more depressed about the inherent cruelty of the ranching business. By October 2014, she had decided she no longer wanted any part of ranching. She went vegan and began her pursuit of a dream to open a farm animal sanctuary. She forged relationships with many key leaders in the vegan movement who offered insight and counsel and with tremendous determination she worked toward creating a sanctuary out of what was once a beef cattle ranch.

Renee’s background includes a star-studded career as a professional singer, songwriter, and recording artist. In her life before Rowdy Girl Sanctuary, Renee traveled extensively with her band, Renee King & Wildcard, and her album, Renee King Queen of Honky Tonk. In addition to her work in the music business, which also included producing and being a publicist, Renee was a Top Producing Realtor® for five years running in Pearland, Texas. She founded and owned a wellness spa, where she was a certified Hatha and Kundalini yoga instructor and Ayurveda practitioner.

Renee’s passion is her greatest asset, and whatever she invests her time and heart into has manifested brilliantly in the world. But she believes her true calling has finally found her in her work at Rowdy Girl Sanctuary. Her desire to be a mother has been fulfilled in the care of the farm animals at RGS. And now she is a catalyst for change in a sometimes dark and cruel world to educate others about the vital importance of adopting a vegan lifestyle. Renee finds her greatest strength in the still, small voice inside her that she has come to know through her practice of yoga and meditation.

This episode leaves us full of joy and hope; changes are possible when motivated by love and awareness. Get inspired by this beautiful life journey!

Outline of This Great Episode

[8:52] Destruction that Hurricane Harvey caused on the Sanctuary.

[12:28] Documentary about the impact of Hurricane Harvey on ranches.

[27:47] “I started naming the cows and following them around, I realized something was wrong”

[37:15] Not being able eating her own animals but eating others.

Mentioned In This Episode

Vidal thanks you for using her banner for your shopping.

Book to read when becoming vegan.