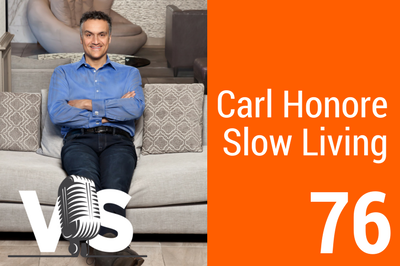 In Today’s Episode
Have you heard of the “slow living” movement? If you’ve been feeling stressed out, or like you have too much on your plate, today’s show is really going to help you put things into perspective.

Our guest, Carl Honoré, is an award-winning writer, broadcaster, TED speaker and the global spokesman for the Slow Movement. Carl travels the world to teach individuals and organizations how to power forward by slowing down, and whether running a small workshop or speaking to thousands from the stage, Carl is dynamic, inspiring, insightful and funny. His audiences range from C-suite executives, entrepreneurs and IT professionals, to teachers, academics, and medical practitioners. Before spearheading the Slow Movement, Carl spent a decade working as a journalist. He covered Europe and South America for the Economist, Observer, Miami Herald, Houston Chronicle, Time, National Post, and other publications.

Translated into 35 languages, his books have landed on bestseller lists in many countries. His first book, In Praise of Slowness, was a BBC Radio 4 Book of the Week, and the inaugural choice for the Huffington Post Book Club. It was also featured in a British TV sitcom, Argentina’s version of Big Brother, and a TV commercial for the Motorola tablet. His second book, Under Pressure, was shortlisted for the Writers’ Trust Award, the top prize for nonfiction in Canada.

Carl recently joined the Advisory Board of Jack Media, which makes a Slow messaging app. He also sits on the Board of Trustees of Hewitt School in New York City.

He lives in London with his wife and two children. In his spare time, he plays ‘slow’ sports like hockey and squash.

Outline of This Great Episode
[2:43] Our society tends to glorify speed.
[5:30] Deborah introduces Carl Honoré.
[8:16] How would Carl define the “slow movement?”
[9:52] Life is about striking a balance.
[10:34] Slowness has become taboo.
[12:44] We’re inching toward a turning point where attitudes about speed will change.
[15:13] Carl began to see the value of slowing down when he started reading bedtime stories to his son.
[18:02] We want to have it all, right now.
[21:31] Because of social media, we’re losing true connection.
[27:45] Carl feels optimistic about the future of slowness.
[29:17] People are in a hurry because of fear.
[35:54] How do you start slowing down?
[38:24] It is crucial to consider what you do in your spare time.
[40:56] Why are we all rushing around?
[42:02] Whether with our time or with our food, it’s all about choosing quality over quantity.
[43:36] It’s easy to get stuck, and it’s difficult to change.
[45:05] Time restraints are destroying our health care.
[47:57] How are children being affected by their parents’ hurried lifestyles?
[53:09] Thank you to everyone who left us a review last week! Be sure to check out VidalSpeaks.com, where you can find my story, my favorite products, and much more! Please support this show by using the Amazon Banner on my site for all your Amazon purchases, which will pay a small commission to me with no extra cost to you. It really helps. Please also consider donating directly to keep our show going, leaving us a review or sharing our show with a friend. All of this supports our mission. Thank you!
[55:29] Kids need unstructured play.
[1:05:00] Countries that have “slow” cultures tend to have productive economies.
[1:14:29] Carl tells us about his books and a “slow app” he has helped to develop.
[1:16:33] Are people ready to slow down?
[1:17:25] Carl is working on a new book about aging.
[1:19:35] Do less, switch off and adopt a “slow ritual.”