Dr. Stephanie Seneff – The Connections Between Glyphosate and Autism, Parkinson’s ALS, and Other Conditions – Episode 41 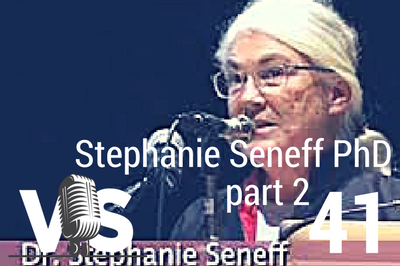 Stephanie Seneff is a Senior Research Scientist at the MIT Computer Science and Artificial Intelligence Laboratory. She received the B.S. degree in Biophysics in 1968, the M.S. and E.E. degrees in Electrical Engineering in 1980, and the Ph.D degree in Electrical Engineering and Computer Science in 1985, all from MIT. For over three decades, her research interests have always been at the intersection of biology and computation: developing a computational model for the human auditory system, understanding human language so as to develop algorithms and systems for human computer interactions, as well as applying natural language processing (NLP) techniques to gene predictions.

She has published over 170 refereed articles on these subjects, and has been invited to give keynote speeches at several international conferences. She has also supervised numerous Master’s and PhD theses at MIT. In 2012, Dr. Seneff was elected Fellow of the International Speech and Communication Association (ISCA).

In recent years, Dr. Seneff has focused her research interests back towards biology. She is concentrating mainly on the relationship between nutrition and health. Since 2011, she has published over two dozen papers in various medical and health-related journals on topics such as modern day diseases (e.g., Alzheimer, autism, cardiovascular diseases), analysis and search of databases of drug side effects using NLP techniques, and the impact of nutritional deficiencies and environmental toxins on human health.

After last week’s episode with Dr. Stephanie Seneff, I was more eager than ever to get the word out about the dangers of glyphosates. So we actually continued the conversation for this episode and you’ll get to hear a lot more of what she’s learned in her studies. She’s uncovering some amazing data that suggests that glyphosate poisoning is connected to Autism, Parkinson’s, ALS, and much more.

Glyphosate and autism connections are becoming more and more obvious as the research continues but you don’t hear about it because the companies that produce the chemicals that contain glyphosate are in the back pocket of powerful politicians. The same is true of the companies that supply many of the vaccines we routinely give our children – and you got it, those vaccines often contain glyphosates too.

It makes me angry when I realize how ignorant the public is to the dangers of glyphosate – but it’s not our fault. The truth has been kept from us because it’s not profitable. The use of this dangerous chemical has been going on for so long it’s hard to pull it in and make changes, so the powers that be just look the other way when research shows that it’s a problem.

What can you do to avoid the effects of glyphosate so it doesn’t contribute to autism, ALS, or Parkinson’s disease in your family? One of the most important things Dr. Seneff recommends is eating organic and whole foods as much as you can. That’s the only way you can avoid the pesticides that contain glyphosate. Eating organic won’t entirely prevent you from ingesting this harmful chemical, but it will take you a long way towards health.

If you want to undo the impact of glyphosate damage that may have already happened to your body the best place to start (besides eating organic) is to get your gut health in optimized. On this episode, Dr. Seneff and I talk a lot about what it takes to get your gut healthy and give some very practical recommendations for how to do it.

Resources Mentioned on This Episode

A description of how glyphosate impacts the body from MIT PhD. scientist Stephanie Seneff:

1) Glyphosate is an antimicrobial agent (antibiotic) and it preferentially kills the good bacteria, which causes an overgrowth of pathogens in the gut. This leads to leaky gut syndrome and inflammatory issues.

2) Glyphosate chelates rare minerals like manganese, cobalt, molybdenum, copper, iron, sulfur, selenium, etc., and this disrupts the management of these very important nutrients throughout the body.  The minerals end up piling up in the wrong places, causing both toxicity and deficiency at the same time.

3) Glyphosate disrupts cytochrome P450 enzymes in the liver, which are important for many things, two of which are activating vitamin D and detoxifying multiple toxic chemicals and drugs.  Acetaminophen (tylenol), for example, becomes toxic when these enzymes aren’t working.

4) Glyphosate works synergistically with the aluminum, mercury, and glutamate in vaccines to cause much greater harm than would be the case if there were no glyphosate present in the blood when the vaccine was administered.

5) Glyphosate interferes with the shikimate pathway, which is used by both microbes and plants to produce the essential aromatic amino acids. Our own cells don’t have this pathway, and they depend upon food sources and synthesis by gut microbes to supply these nutrients. They are precursors to many biologically important molecules such as the neurotransmitters serotonin, melatonin, dopamine, and norepinephrine, melanin, vitamin E, vitamin K, etc.

In my view, the core pathology in autism is insufficient sulfate in the cerebrospinal fluid in the brain.  This causes a severe impairment in neurogenesis and an inability to “clear the trash.”  It’s indirectly caused by sulfur deficiency, melatonin deficiency, impaired sulfate synthesis, impaired sulfate transport, and excess flushing of sulfate through the kidneys – all induced by glyphosate.  There’s also neuroexcitotoxicity from glutamate and glyphosate and aluminum working synergistically.