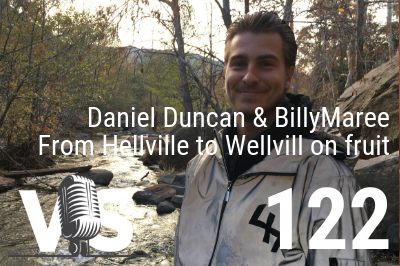 My guest is Daniel James Duncan & BillyMaree. His story is a happy one because he went from bedridden in pain to a fully vibrant grateful aware soul that now can live his life. Daniel healed on the fruit diet. He has done juice feasting, water fasting & of course much emotional work. ALL of these factors play a role in healing. Since the emotional part is often ignored or misunderstood, as a homeopath I was most interested in focusing in on this aspect of his journey!

In order to discover this blessed lifestyle of a raw/high-fruit diet, I had to go through a bit of suffering – arising from ignorance… something I’m so grateful for experiencing, to now where I have discovered the Truth & appreciate Life in such a profound way, knowing I can consciously create my Wellbeing. Currently, I’m 23, happier & healthier than ever, but at 19, I wasn’t well. I had underlying issues that caused skin problems, fatigue & depression.  I was given medication called Accutane to treat this & in less than 1 year, this drug took my body from Me. From physically fit & capable, I was practically bedridden approaching kidney failure. Doctors said my symptoms were consistent with Fibromyalgia – typically only seen in the elderly. This drug fast-tracked the expression of genetic weaknesses, exactly what my mother has had for over a decade. Fortunately, becoming more health conscious before all this, I was already chasing trails of information… being guided into what was ahead. When my condition became chronic, I spent most waking hours seeking answers, eventually finding John Rose, who inspired Me to do a Juice Feast… I managed to do 100 days, achieving what would’ve taken 6 months to a year if I had’ve been simply eating fruits. This provided great relief, but did not heal Me. During the fast, I discovered Robert Morse – this is where everything changed, rapidly. Having already given up on western medicine, realizing their drug had caused my condition, I had no confidence in them, so I became my own doctor –

Morse’s teachings allowed Me to execute this with certainty. After a year of studying & using his herbs to assist my organs/glands back to proper function, my body operated more efficiently than ever. The cleaner we are, the more sensitive/in tune we become with ourselves. Intuitively, I knew I had to do a water fast – so I did. After 16 days, I had exhausted all my reserves. Cleansing on fruit first for some time allowed me to safely fast on water. After delicately rebuilding on fruit (in June/July) my body had healed. Since then I’ve been very active, traveling, enjoying health & spreading this message. Fruit gave my life back – I now devote myself to this powerful message of fruit & fasting.

BillyMaree Duffy is an Australian citizen that is a talented singer/song writer. She has been Daniel’s girlfriend before he was stricken with his illness known in the medical world as Fibromyalgia.  She too took the drug called Accutane that is given out like candy to our youth with acne.  She also had her share of symptoms such as her hair falling out and an overall feeling of being poisoned.  She got off the drug but then had to be the support system and caretaker of Daniel has his health plummeted and he became almost bedridden.  It is of great value to hear both their stories because it is one journey to be the person in pain and yet another to be the person who is the partner who has to watch the person they love be in pain and do everything to help them when often nothing helps or works.  Her story can be shared with many out there in this situation.

Other links for things mentioned in show